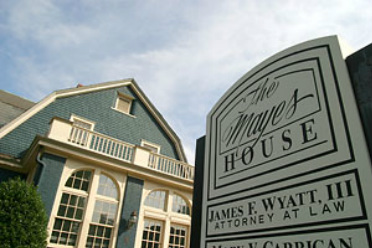 Wyatt & Blake, LLP is located at 435 East Morehead Street in the historic Mayes House.  This house, built by John and Idella Mayes in 1902, is one of the last remaining homes of the grand residential boulevard that formed the northern boundary of Dilworth, Charlotte’s first suburb.  The house is architecturally significant as one of the finest examples of the Shingle Style house, a style dating from 1874 to the end of World War I.  A wooden version of the masonry Romanesque Revival, the Shingle Style house is considered by many architectural authorities to be the first truly American style of house.

John Mayes (1856-1947) was born in Luftborough, England, and came to the United States after the death of his first wife Elizabeth.  Mr. Mayes moved from Massachusetts to Charlotte around the turn of the century, and spent most of his career as a textile machinery agent, mill designer and mill executive.  Mr. Mayes married Cora Idella Green Mayes (1869-1939) and purchased the lot for this house in 1901 for $2,000.

The Mayes lived in this house for 24 years and raised three daughters and one son.  Sadly, in 1911, their youngest daughter, Katherine, died at the age of 21 months.  A funeral was held at the home, and the child is buried in Charlotte’s Elmwood Cemetery.  A happier occasion was in 1914 when their oldest daughter Idella held her lavish wedding at home.  She was escorted by her father down the main stairway of the house, adorned by a beautiful set of stain glass windows.  The local newspaper, The Charlotte News, described the wedding as an event of “notable beauty attended by rare elegance of detail.”  The Mayes’ youngest daughter, Elizabeth, also held her wedding at the home in 1924.  The only son of the Mayes’, John Hendry, left home in 1902 to raise a family of his own.  He had a granddaughter named Frances Mayes, who is a poet and the author of Under The Tuscan Sun.

The Mayes House has had a series of owners from 1926 until 1993.  Over the years, it was  even used as a local haunted house.  The house began drawing attention of the Charlotte Mecklenburg Historic Landmarks Commission (“HLC”), and they began to take note of its architectural significance.  In 1991, the HLC began the process of designating the house as a historic landmark, but there was a delay due to the lack of support of the owner at the time.  However, in February 1993, the current owner (investor Walter Fox) informed the HLC that attorney James Wyatt would be purchasing the home.  A few months later, at the joint request of Mr. Wyatt and the HLC, the Mayes House became a Charlotte-Mecklenburg historic landmark, and by August of 1993, it was listed on the National Register of Historic Places.

Mr. Wyatt purchased the Mayes House in February of 1993, and it was restored under the auspices of the HLC.  Over $300,000 in renovations were done in an effort to preserve the home and create an office space for Mr. Wyatt’s law practice.  Many of the original features of the Mayes House have been preserved: crown moldings, wainscotting, stenciled baseboards, fireplace surrounds, balustrades and newels.  Still remaining is the original metal electric candlestick light at the bottom of the stairway.  In keeping with the Shingle Style, the main rooms flow easily from one to the other to create a “living hall” suitable for large gatherings (the Mayes daughters’ weddings and young Katherine’s funeral).  Renovations included: new wiring, new plaster, two new interior walls, and a beautiful glass wall created on the main floor.  The Mayes House is now designated, both locally and federally, as an historic landmark.

Click here if you would like the read the March 2020 essay written by Dr. Dan Morrill of the Charlotte Mecklenburg Charlotte Landmarks Commission. 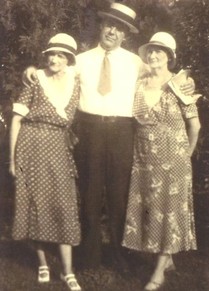 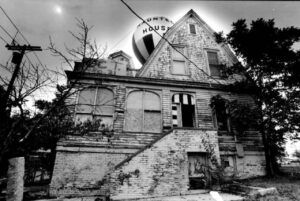 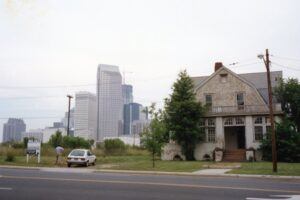 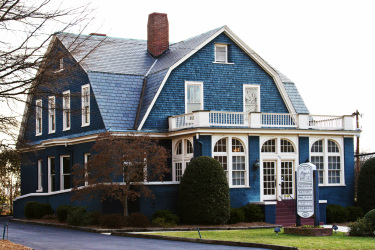 See our profile at Lawyers.com or Martindale.com